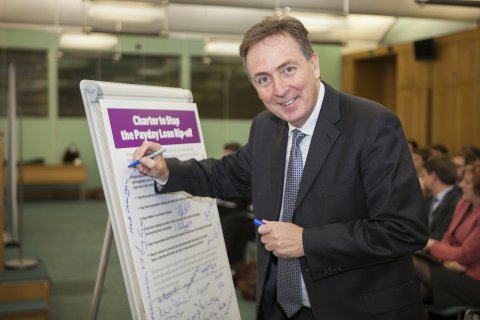 NICK Smith MP has welcomed a “triumph for the consumer” as Labour proposes a levy on the payday lenders.

The policy would pump an estimated £13m into credit unions if Labour won the 2015 General Election.

Mr Smith, who has been campaigning for credit unions on the streets of the borough, said the levy was a big step towards tackling the payday loan problem.

Speaking after signing a Charter to Stop the Payday Loan Rip-off in the House of Commons, Mr Smith said:  “Whatever the circumstances, when my research discovers that people in Blaenau Gwent are borrowing more than £1m a year from just one payday loan provider, we are facing a real problem.”

“It would be naive for me, however, to think people don’t need short-term credit in an hour of need -; particularly facing the squeeze this Government has created.

“I have been championing credit unions for a number of months as a socially responsible alternative that are looking to help customers, not drain them of funds.

“As a result, this policy is music to my ears. Credit unions are struggling to find their feet while the big companies spend millions on advertising alone.

“Until they can compete on an equal footing, what chance does a credit union have? This is another Labour policy that is addressing our living standards crisis and one I support wholeheartedly.”

Labour’s policy would result in a cap on credit cost, limit the high street presence of payday lenders and see funds to credit unions doubling through a levy system.

The Charter to Stop the Payday Loan Rip-off called for tougher regulation of payday lenders and is supported by some of Britain’s biggest debt, consumer and anti-poverty organisations -; including Which?, Citizens Advice, StepChange Debt Charity, Church Action on Poverty, and the Centre for Responsible Credit.

MPs from all parties and campaigners are urging the Financial Conduct Authority to back the Charter and introduce tougher regulation of payday lenders to stop millions of people being ripped-off.

Over 40 MPs and peers backed the Charter at its launch in Parliament on Tuesday 15th October and members of the public can back the Charter at change.org/paydayloancharter