Borough gets behind food bank drive 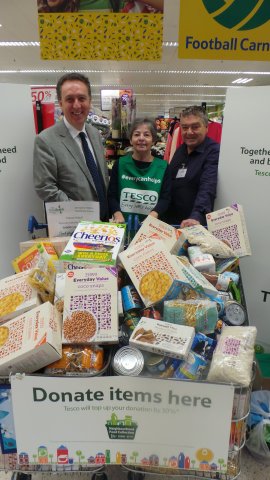 The generosity of shoppers was as overflowing as their trolleys in a supermarket food bank sweep.

Shoppers were given a list of all the foods needed by the food banks across Blaenau Gwent to help those in need, and soon returned after their trip through the tills laden with donations.

The Blaenau Gwent MP, who has taken part in several collections and whose office gives out food bank vouchers, said it was good to once again support the work of the food banks.

“We aren’t the richest of boroughs, so to see how giving and generous people were at the collection just means so much more”, he said.

“The policies of this Tory Government are creating this demand for food banks and that is appalling.

“A civilised society would want to be about work for all, which is why Labour will introduce the Jobs Guarantee scheme for young unemployed people, to give people the opportunities and the training they need.

“The hard work of these volunteers needs to be recognised more than ever. We can’t just start accepting this is the way the country should be, and we can’t start allowing pleas for help to fall on deaf ears.”

Since their inception five years ago, Blaenau Gwent food banks has grown from a small operation to one with 40 volunteers and posts across the borough.

Martin Abel, manager for Blaenau Gwent Foodbanks, said: “I think people don’t appreciate how volunteering is a big part of the food banks. We’re helping these volunteers get back into work. It’s a whole part of the system that people don’t see and we can help with.

“I think the rise in volunteers comes down to something as straightforward as this is something that can help people. People don’t like volunteering for things they don’t support.”