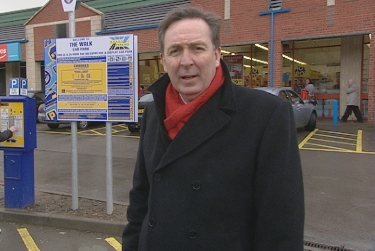 Nick Smith MP has backed calls for motorists to be given a fair chance as private parking fines have skyrocketed.

According to the latest figures from the Citizens’ Advice Bureau, in the year ending March 2015 private parking companies have requested driver information more than three million times -; up from 2.4m the previous year.

With the CAB dealing with 26% more cases revolving around private parking, they have called for the law to be tightened so private companies cannot prey on motorists.

At the moment firms are required to give people a “reasonable” grace period for stopping but not parking. But the law currently does not define what a reasonable period is, leaving what counts as overstaying open to interpretation.

The Blaenau Gwent MP has campaigned against unfair parking practices in the past, notably going against Excel Parking’s poor signage leading to Ebbw Vale shoppers being inundated with fines.

Speaking after the publication of the report, Mr Smith said motorists getting a fair deal was vital for both individuals and society at large.

“The Court of Appeal recently decided an £85 car parking charge notice wasn’t unreasonable. That’s a lot of money to be mistakenly or unfairly charged”, he said.

“If our shoppers get charged, they’re going to shop elsewhere. We saw it in Ebbw Vale when people weren’t willing to risk a fine.

“It’s not just shoppers though. It’s the people being reunited with old friends from the airport, or the family taking their loved one home from the hospital.

“We have to protect people against unfair business practices, which is why I’m supporting the call for a better deal for motorists.”

The CAB listed common complaints against private companies including the signs displaying a fee being inadequate or hidden, a faulty ticket machine or automatic registration place recognition machines and enforcement companies not using discretion for minimal overstays.