Campaigning against the payday loan problem in Blaenau Gwent 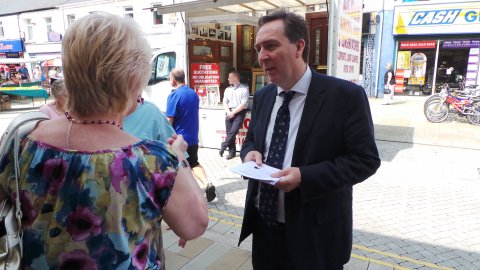 Nick Smith MP took to the streets to warn about the pay day loan problem as Parliament begins to investigate their dealings.

According to data uncovered by Mr Smith, people in Blaenau Gwent borrowed more than £1m a year from pay day loan provider Wonga -; with the average person paying 20% interest for just an 18-day loan.

In a bid to tackle the downward spiral of debt, the Blaenau Gwent MP visited Ebbw Vale market to campaign for a local solution.

Mr Smith, who was joined by Labour councillors and volunteers from the community, talked to shoppers and handed out leaflets promoting SmartMoney, a community Credit Union that encourages savings accounts and low-cost loans.

It comes as Mr Smith also pressed the Government on pay day loans on the last day of Parliament.

Speaking after the market day event Mr Smith said: “The Office of Fair Trading revealed this month one in twenty families rely on pay day loans to get by.

“That, coupled with my own research, paints a worrying picture on how vulnerable we are to convenient loans with sky-high interest.

“It was fantastic getting a chance to speak to people on the streets about the problem and get a sense of the support for this campaign.

“Nearly everyone spoke about how terrible they are, yet had a story about some family member or friend who has considered or even taken up these loans.

“I will be supporting the High Cost Credit Bill in Parliament, but in the meantime I am encouraging people to give their local credit union a look.

“They help people with savings and advice too and are a real community alternative.”

Rev. Geoff Waggett, who was one of the volunteers taking part on the day, said: “I’m supporting this to keep pay day loan business out of our towns.”

The second reading of the Bill will take place in September.

Mr Smith said: “I raised the cost of high pay day loans in Blaenau Gwent with the leader of the house, and asked that we had a debate in Government time on the importance of credit unions supporting vulnerable families.

“I’m pressing the Government to do more, and I found the Leader of the House’s response painfully inadequate for Blaenau Gwent residents. He offered a back bench discussion, but I want it in Government time so they will have to take responsibility for acting on this key issue.”

For more information on SmartMoney, visit www.smartmoneycreditunion.co.uk/ or call 029 2088 3751